The teaching case ViaVia Yogyakarta addresses the strategic choices of social entrepreneurs, Mie Cornoedus and Ingvild Solvang, who founded the ViaVia café in Yogyakarta, Indonesia. The case study was written by SEFORÏS team members Petra Andries and Alain Daou, from KULeuven, and was published in the journal Sustainability. 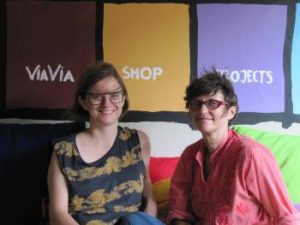 In their daily management of ViaVia, Mie and Ingvild put respect for local culture and ideals above short-term profit. They offered good working conditions for staff with opportunities to learn and grow, which resulted in a loyal group of employees who felt a sense of ownership of ViaVia. Furthermore, the organization was involved in a multitude of social, cultural, environmental and humanitarian projects. As a result, ViaVia was regarded as a positive contributor to the local community. In 2013, it secured international recognition for its efforts by receiving the prestigious Wild Asia Responsible Tourism Award. However, Mie and Ingvild wondered whether the support of many projects was perhaps spreading their resources too thin, and whether greater impact could be generated with fewer but more focused initiatives. Despite ViaVia’s success as a social enterprise, Mie and Ingvild reviewed the past 20 years of the café’s existence and contemplated the sustainable strategy that they should follow in the years ahead. The article by SEFORÏS researchers Petra Andries and Alain Daou in the journal Sustainability gives an insight in what ViaVia Yogyakarta has accomplished as a social enterprise and what were some of the strategic choices that were made.

One quote from Ingvild Solvang in the article is especially revealing in that sense:

“Any urban culture or community is varied and diverse, and we think we should be flexible, go with the flow and grab the opportunities to support different segments of the community. ViaVia Jogja philosophy so far is to support a wide range of projects, most of which are small projects.”

Initially, Mie Cornoedus intended ViaVia Jogja as a forum for travelers to obtain information from each other and from ViaVia staff. Twenty years later, the project comprised the following activities: a restaurant, a guesthouse, a travel agency, an art space, a fair trade shop, an artisanal bakery, yoga classes and an office promoting sustainable tourism. ViaVia Jogja has a full-time staff of 52 and 40 freelance guides. All staff (except the founders) are locals. The case study further states that while income was generated through the café, the guesthouse, the fair trade shop, and the local tours, Mie and Ingvild reinvested part of these revenues in a multitude of projects. Over the past 20 years, they have supported or initiated more than 50 projects impacting not only their staff but also other men, women, youngsters living with disabilities, and street children, as well as other vulnerable groups in the community.

The founder look at their approach in a very specific way, they call it doing something from nothing.

Mie Cornoedus: “The mix of projects is diverse, and we support small projects. This may be seen as spreading ourselves thin and not having that one large impact à la Bill Gates versus malaria. But the point is to remain flexible and able to respond to proposals submitted by individuals and community groups at any time. So, ViaVia becomes known as a place where people can come, discuss ideas and get support. It is also important to support other people’s projects in their own right, rather than trying to force groups to conform to the ViaVia vision. Importantly, when looking at it from the perspective of business sustainability, the idea is not always about how much profit is redistributed, but how much positive value is generated from goodwill, from nothing, what we call doing something from nothing”.

Ingvild Solvang: “It is like putting down the first brick of a new house. Once the idea of the house has been conceived, everyone can add new bricks to it”.

Twenty years later Mie and Ingvild are proud of their accomplishments but also put forward questions about how they could have had a greater social impact. All this makes the teaching case ViaVia Yogyakarta valuable and compelling reading.